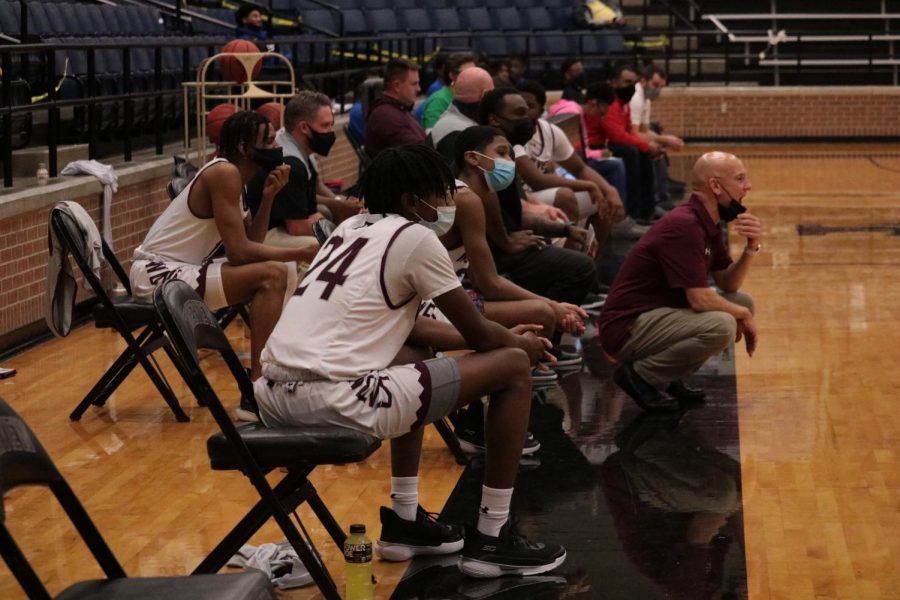 Basketball players watching the game on the sideline.

Quarantining one or two students exposed to COVID-19 has become the new normal. However, when the boys varsity basketball team was exposed to the coronavirus at the start of the season, the entire team and their coaches had to be quarantined.

“We missed six non-district games total, five when we were quarantined and one more when an opponent was,” Varsity Coach Duane Gregory said.

Contact tracing is the main reason players were told to stay home for 10 days.

The games weren’t made up due to scheduling conflicts, but two additional games were picked up.

“It was discouraging, but also kind of inevitable,” Gregory said. “Fingers crossed we only quarantined this once and we got it out of the way early.”

Junior Braylon Crosby was confident the season would carry on.

“I thought we’d play because UIL had it all figured out with the guidelines and safety rules for COVID-19,” he said. “Everyone was being so careful with things.”

Crosby was quarantined a few days before his team because of exposure through a friend.

“I got quarantined before my team was and I had to watch them play a game online without me and it was hard to watch,” he said. “We made mistakes. When you watch a game on tv, you see things you can’t see on the court.”

He missed being with the team.

“I didn’t like being quarantined because we’d had to be away from the court and each other,” he said. “I hated it. We were around the house all day and I didn’t want to be there.”

The girls varsity team has also dealt with quarantine issues.

“We missed two non-district games to Lake Dallas and Cedar Hill,” Varsity Coach Kit Martin said.  “Honestly, I didn’t think that I’d ever make it through the season with COVID-19 just because things have been so hectic with the number of rising cases.”

Martin has tried to keep a positive attitude about the season.

“With the way things were going I’m just glad that I got to be able to coach,” she said.

Weaver said keeping distance from each other is the hardest part.

“Social distancing was the biggest struggle because it’s harder to maintain on the court,” Weaver said.

Coaching strategies have been more difficult, according to Gregory.

“We have been intentional about building togetherness on our teams,” he said. “(However), it is a challenge to build togetherness and also have social distance.”

“The most difficult thing has been blocking how to do ball drills from a safe distance because of it being an inside sport,” she said.

Martin said she is hoping students adjust to the new normal.

“I’m even excited about next year because I’ll finally get used to the world being overtaken by COVID-19 and it won’t be as hard to do because I would have already assimilated,” she said.

Taking all the extra precautions and safety measures have been worth it to Gregory.

“This season has been unlike any other, but it is better than the alternative, which would have been no season,” he said. “I have always felt our program is good at adapting to different situations and that has been the challenge since day one for this season.”