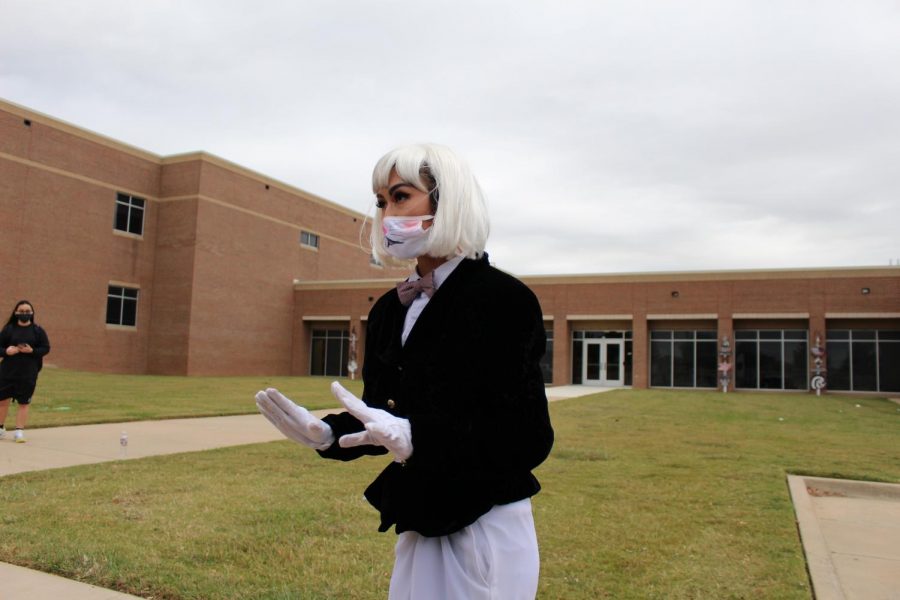 A scene in the play.

After many high schools skipped fall productions because of COVID-19, the theatre department decided to hold a drive-thru play.

“When I started to think about our season for this year, trying to keep performance opportunities for our students was very important for me,” Director Kenneth Fudge said.

“I wanted a script that we could perform outdoors because that seemed to be a bit safer for performances,” Fudge said. “I stumbled across the script for ‘Alice in Quarantine’ and instantly fell in love with it. It was smart and dealt with the issue of COVID-19 in a creative way.”

The actors and actresses performed outdoors while people stayed in their cars in a line.  Students acted out the same scene over and over, while also wearing face masks for precaution.

“Although COVID is still out there, the play was made under safe conditions,” junior Caleb Shumaker said. “We all had fun in the making of the play.”

Since actors were positioned in one spot, many voices were pre-recorded and played by volunteers.

“I voiced the recording for the Queen of Hearts and King of Hearts in the last scene” Shumaker said. “Otherwise my job was supposed to activate sounds based on cues given to me.”

Students did not meet in the same area, to keep group settings small.

“I loved that I could rehearse each scene separately from everyone else, so students could feel safer in their performance bubble,” Fudge said.

The play route wrapped around the campus.

“Although COVID is still out there, the play was made under safe conditions,” Shumaker said. “Though Corona was a concern, we all had fun making it.”