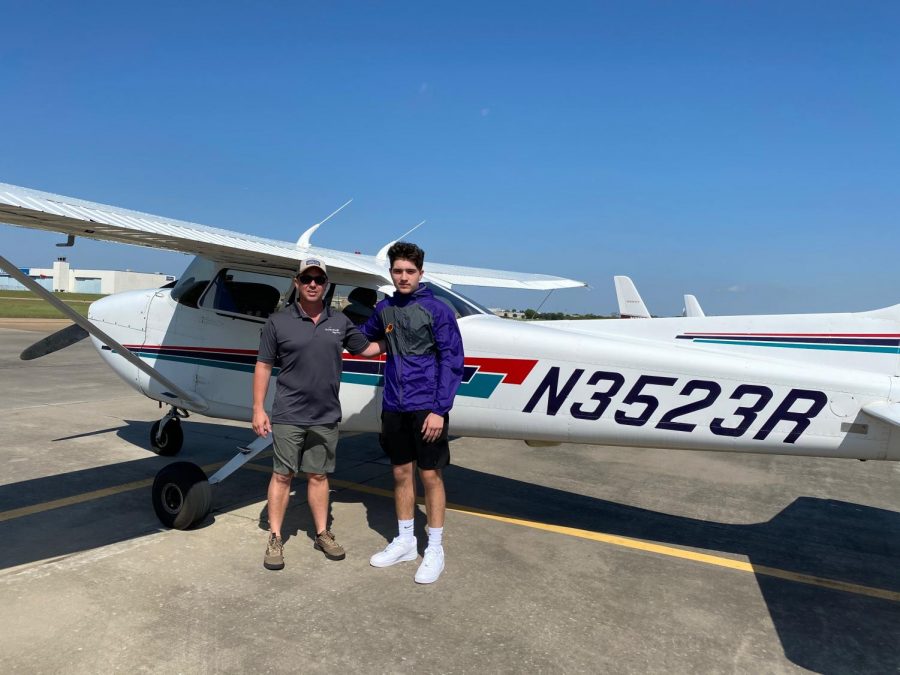 “There’s no way to really describe it other than fun, exciting and proud because I finally did it,” Duran said. “Becoming a pilot is something I’ve wanted for so long, so flying solo was one of the first big life goals I’ve checked off.”

Ever since he was a kid, Duran always knew that becoming a pilot was something he wanted to do.

“Ever since I was little I wanted to be a pilot,” Duran said. “Everything about flying really interested me.”

His uncle introduced him to flying.

“When I was little, I flew with my tio and it really made me know that that’s what I wanted to do,” Duran said.

Given the amount of free time he had due to the COVID-19 lock down, he thought it was the perfect time to start flight school.

“When Corona hit I had a bunch of free time because all I was doing was working, so I wanted to see if I could start going to flight school and take lessons,” Duran said.

Bringing up his plans to his parents, Duran said they supported his dreams but worried about his education.

“They were supportive, they just kind of didn’t like how much time they knew it would take up with me going to school and having a job,” Duran said. “They were proud that I was taking steps toward my future career but it took some convincing.”

When it came to the finances, Duran puts in his own checks towards his lessons along with some help from his parents when needed.

“As far as paying for it, my first lesson was paid for by my parents and they’ve helped me out a couple times where I was waiting on my next check or on my solo since it was a big milestone,” Duran said. “For the most part I pay for it, that’s what my checks almost completely go to.”

Danielle Flores, who was previously a flight attendent, sponsors the Aviation Club and encouraged Duran to join.

“When I got my schedule for school I ended up in Mrs. (Danielle) Flores class,” Duran said. “She’s helped mentor me a lot so when she told me about the Aviation Club, I told her I wanted to join.”

When he started his classes, there were people who helped him get settled and feel at ease.

“Once I started flying at Aviator Air I met a guy named Steven, Mrs. Flores’ husband, who was cool and really friendly,” he said. “He helped me get comfortable there.”

When describing the process of take off, Duran made sure to put in as many details for those of us who don’t know all the flight terms.

“First you preflight the plane, which is where you check the fuel quantity and then you just inspect the plane to make sure everything looks alright and everything is there and working, then you get in, get the plane started, and get the weather. Depending on if the airport is towered like ours, you call ground (the people in the tower responsible for what happens on the ground) to ask for clearance to taxi to the runway. After you get clearance you take off,” Duran said. “It sounds a lot more complicated than it is but, it’s a lot of small things and with time it’s just a routine that you get better and faster at.”

As some of us have been a passenger in a plane, not a lot of students can say they’ve flown one and know the feeling that it comes with.

“I think the idea of actually just being alone and having full control of the plane with everything being on you made me feel something of an adrenaline rush,” Duran said. “Honestly I don’t know if you’re ready if you aren’t just a little nervous, but I think it was more of me getting into my own head than me being nervous.”

The flight school worked with him one-on-one.

“If you don’t understand, don’t be afraid to ask,” Duran said. “It’s alright to change learning styles, instructors or anything if it’s going to benefit you.”

He said in learning to fly, there’s a lot of support around you to ensure you feel comfortable.

Duran said, “Flying is like a family, there’s a lot of people that are willing to help you and teach you so aren’t afraid to get out there.”

Duran wanted to recognize the one person who made this possible for him.

“Through all the recognition I’ve gotten up to this point, someone who deserves it but hasn’t is my instructor, Kevin Johnson,” Duran said. “He’s done me countless favors and has helped with every question I’ve had, I don’t think I would be the pilot I am without him.”