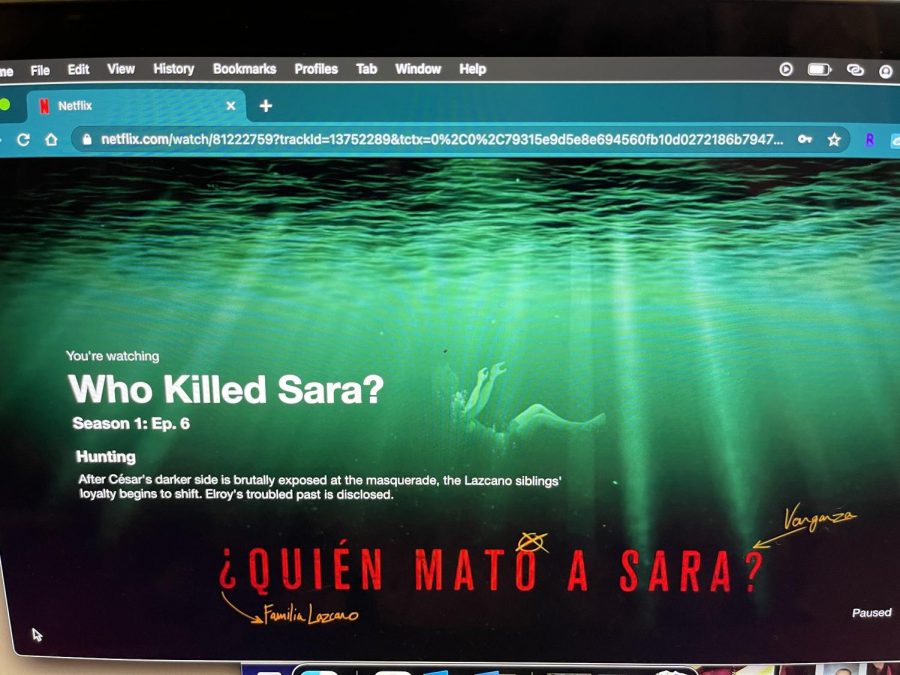 Netflix seems to be jumping on the true-crime trend, releasing crime thrillers one after another. In a sea of new movies and shows on the platform, Who Killed Sara? stands out. The 10-episode Mexican series follows Sara’s brother, Alex Guzman, who was just released from jail after 18 years and is desperately trying to track down her killer.

The show opens with Sara’s death, a horrifying parasailing accident, then quickly switches to present time. The show almost perfectly transitions from past to present many times each episode throughout the season, revealing more about the different characters and her death each time.

It had me on the edge of my seat from start to finish. Everyone has a secret and just when you come to a conclusion on who the killer really was, you learn more details which causes you to rethink everything. Each character is framed one-by-one as new evidence comes to light. The many twists and turns keeps the show interesting, something many murder-mystery shows fail to do. The most aggravating part, in the best way possible of course, was the cliffhanger in the season finale. We still don’t know who the killer is.

While the acting, music and cinematography is great, there were still noticeable plot holes and inconsistencies which left viewers with questions other than who killed Sara? One thing that followed me from the first episode to the last was, ‘How was Alex jailed in the early 2000s, released almost 20 years later and is now a master hacker?’ He most likely had minimal interaction with technology as it rapidly improved during his years in jail, so how was he so good at hacking right after getting out?

Season 2 of the Netflix Original has already been slated for release on May 19. The release of the first season and the second are so close together that it’s confusing to me as to why they weren’t released as one. Season 1 could have easily been stretched out to 12 episodes and been considered a limited series on the platform (limited series are those made by Netflix to only run for a single season). The preview for the second season seems to introduce all new pieces of the mystery, which leaves me unsure if it’ll be worth watching.

If you’re not a Spanish speaker, the platform offers subtitles in multiple languages with the original audio. But if reading captions aren’t your thing, the show has English, German, Italian and French dubs available.

Season 1 was a fast-paced thriller. It’s another binge-worthy drama from Netflix that will keep you on your toes the entire time. If you’re in need of a new show to watch, it’s the perfect time to start Who Killed Sara? as the next season will be premiering soon.