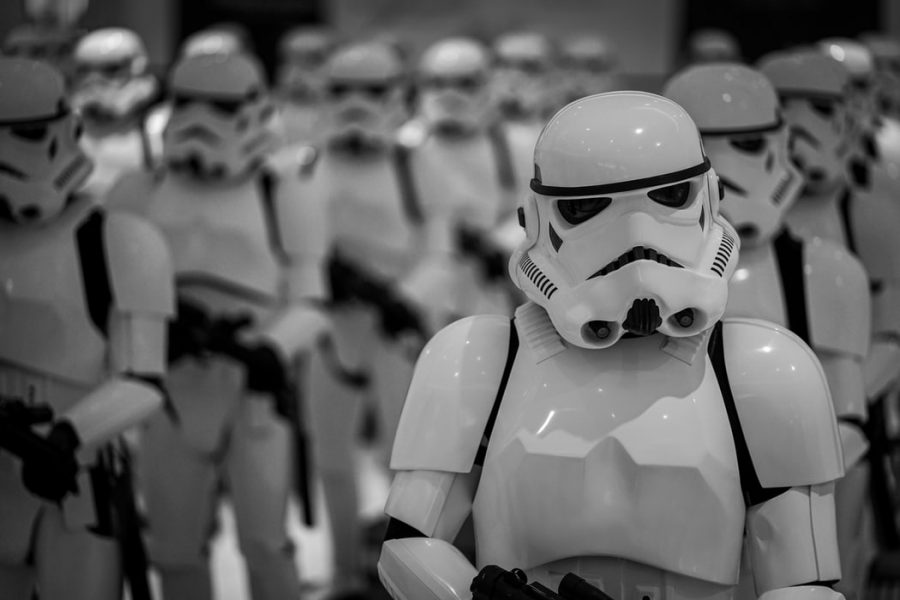 On Thursday night, I finally got to see Star Wars: Rise of Skywalker with three of my good friends who attend Mansfield High School. This movie was the final movie of the Skywalker trilogy. This trilogy was surrounded around a scavenger named Rey and an escaped stormtrooper named Finn. The two team up with a Resistance pilot named Poe and go on an adventure that creates the trilogy.

As you may know, in the beginning of the trilogy, we’re introduced to Rey: a lonely scavenger that lives on the sandy planet Jakku. Rey’s ongoing conflict is finding out who she is because of her parents being taken away from her at a very young age. Now that she’s older and learning the ways of the force, her more recent battle is if she should give in to her dark side or stick with the Resistance.

Now, back to Rise of Skywalker.

So, the movie starts with the introduction of a spy and the return of Palpatine. This sudden concept of a spy is, as interesting as it is, strangely placed. It feels unnecessary, but I guess it adds something to it. It would be more worth it if they did more with the plot point. Towards the end of the middle of the movie, the spy is brought up once again in revealing who it is, and literally in the next scene, he gets killed. The movie moves on, never mentioning it again, and we were all confused.

The next big question I’d say I have also has to do with the spy: the way they jumped from topic to topic. There was so much packed into this one movie alone that it was somewhat difficult to follow along. One moment, Poe, Finn, Rey, Chewbacca, and C3PO fall in a seemingly hopeless hole, the next Rey is using some new force heal, which is weird because of Anakin’s battle with this, and they’re out of the hole. One second Chewbacca dies, the next he’s alive. Next, he’s captured, then he’s free. Then Kylo is searching for Rey, then he found her, then they fight, then they carry on. Things go from point to point with no real closure to each nor a proper acknowledgement of what just happened. It was confusing, to say the least.

Given this being the final movie of the trilogy, I understand the urge to wrap it all up. And naturally, as a large franchise goes, you want to please the fans, but this movie in particular was completely off-beat and way too catering to the crowd. The way they wrote every character into a corner by so quickly summing up their role in the movie left them no other choice but to either kill them or completely just write them off somehow. For example, we got introduced to the planet Kamiji. Here we get smacked in the face with Poe’s past. We find out, in the span of maybe two minutes, that he once had this love interest who now hates him because he somehow screwed up with her as a spice runner. The group throws jabs at it for a few seconds and then we meet the best character in this entire movie: Babu Frik. Babu is a small creature that specializes in droid mechanics. I love Babu with all my heart.

We then move past Kajimi and move on to Rey. She runs away to Ahch-To as she battles her urge to go to the dark side. This is when it gets frustrating: force ghost Luke shows up. This is when I began to realize that this movie relies heavily on their random nostalgia. Bringing back Harrison Ford for a two minute scene with Kylo, Leia only getting maybe ten minutes of screen time tops, Lando continuously popping in and out, and now force ghost Luke randomly bringing out his X-Wing that was said to be destroyed. To make matters worse, he also gives Rey Leia’s lightsaber. As cool as all of these nods were, they were all poorly thrown in and quickly disregarded with no proper acknowledgement. I understand paying homage, but there’s a way to do it without it being too obvious that it was only done for the fans.

Alright, all negativity aside, the movie was, indeed, still good. Besides my obvious bias as a Star Wars fan, it was actually still good. Watching it without criticism and analyzing it after did me well. The cinematography was good and, although rushed, the dialogue was still good. The change in amount of satire was well, as odd as it was, and refreshing. I did have a lot of bad to say, but I still loved it because I love Star Wars.